On November 1st the Executive Committee selected Brian “Stubby”” Hughes (Alaska) to fill the vacancy on the Board. Welcome Stubby!

It’s not too early to register your club for the Winter season…email with your dates and start time.

You can email them to kay@shootpita.com

As always we will make exceptions if these dates conflict with your club activities.

Deadline for submission of propsed new rules and changes is December 31.

Format for submitting a proposal from your State/Provincial Association click here. 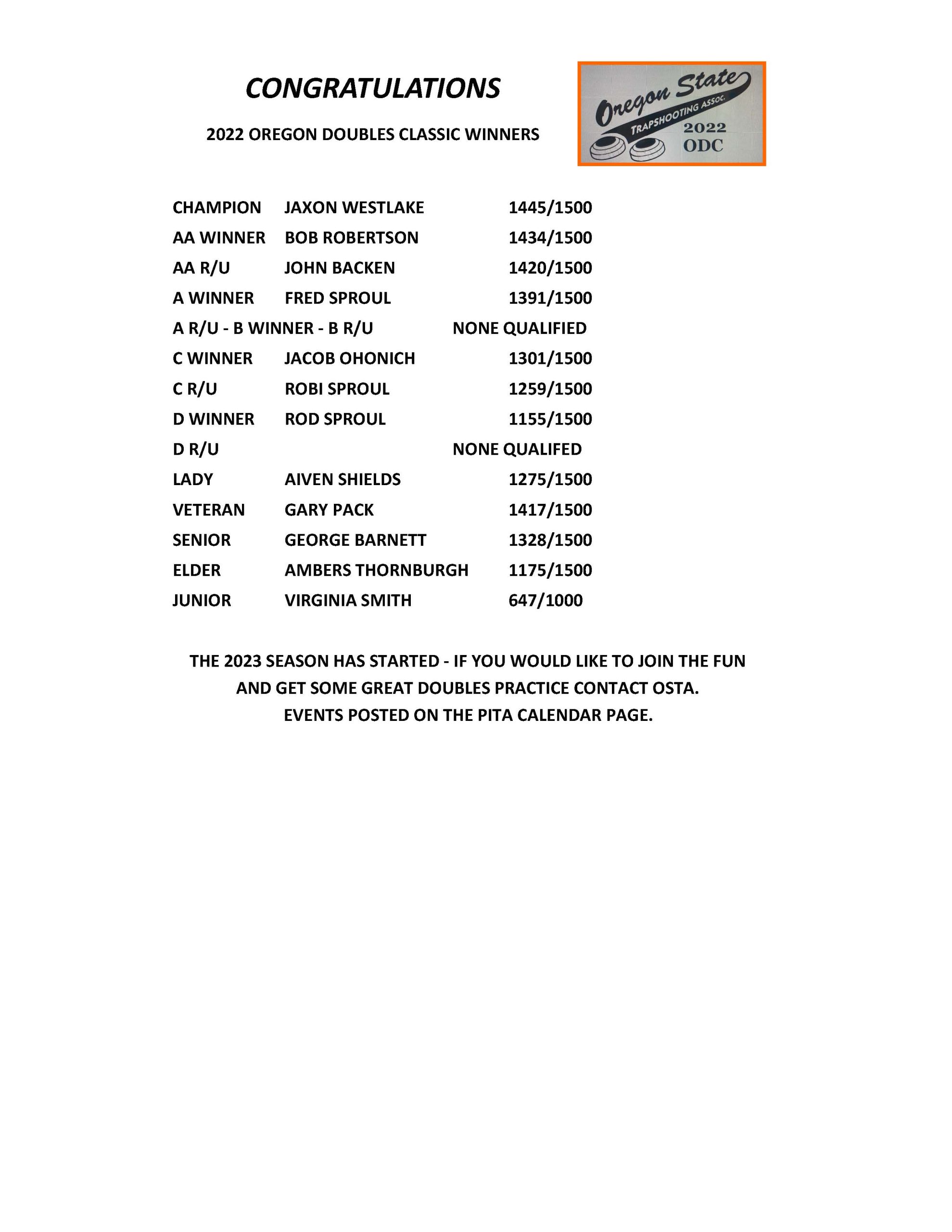 Renew now – either from one of these

If you renew online you will receive an email from PITA once your membership record is updated (normally 2-3 days) with your membership card attached. Be sure to check your ‘SPAM’ and “JUNK’ folders if your card doesn’t appear in your email.  You will be able to download/print your 2023 card in mid-late November once all 2022 scores are posted.

If you renew by mail you will receive an email from PITA (if email address is provided) once your membership is received and recorded.  Be sure to check your ‘SPAM’ and “JUNK’ folders if your card doesn’t appear in your email.

Please consider sponsoring a youth member, only $12.50 and/or a Grand Pacific trophy.   You can sponsor a trophy at the Grand Pacific for as little as $50.  Your name will be listed in the program and at the trophy case as a sponsor.  Your donations help tremendously and allow us to provide premium trophies.

How do you know if your dues need to be renewed?
END_OF_DOCUMENT_TOKEN_TO_BE_REPLACED

PITA hopes you enjoyed the Fall Classic.  Click HERE for a list of the winners.  For more information and to see lewis results visit here.

PITA will be mailing trophy money and lewis payout.  If you have any questions or comments about the event please contact Mike Riggs, Fall Classic committe chair – 503-997-2449 or email info@shootpita.com.

A few clubs have already voiced interest in hosting the Fall Classic in 2023. If you think your club may be interested in hosting a Fall Classic site, please contact Mike Riggs, Betty Phipps or Kay Klundt.

We would like to hear your opinion on the 2022 Grand Pacific.

Please fill out the 2022 Grand Pacific Exit Survey. You can find it on the

Mark your calendars for the 4th Annual PITA Fall Classic – September 23-25, 2022! This 3-day telephonic shoot will be held simultaneously at 7 clubs in 6 states. See the program for more details. 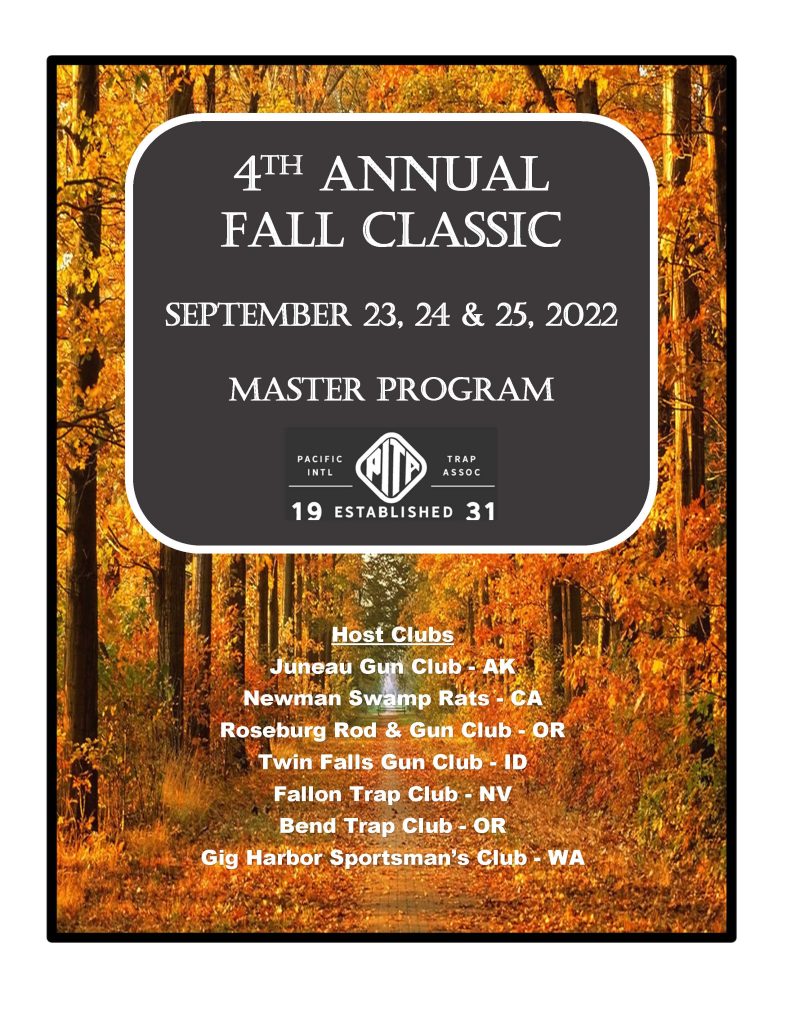 The P.I.T.A. Executive Committee would like to announce a leadership reorganization under which Mike Riggs has been appointed Interim President, effective immediately, replacing Steve Kaufman, who has been removed from his role as an Executive Committee member and officer.

We wish Steve all the best in his future endeavors.  In the meantime, per the P.I.T.A. bylaws, we are commencing a search for a qualified successor who will complete the remainder of Steve Kaufman’s term.

We believe Mike Riggs is an excellent choice to serve in this interim role and lead the association.  As many of you know, he has a long history with our sport and its governing bodies and he works hard to promote the P.I.T.A. Lonny Brown has been appointed Interim Vice President, Michael Sargent will continue to serve as First Vice President, and Jennifer Carter will continue in the position of Past President.  They will be supported by the remainder of the Executive Committee who will continue to focus on the service and business of the association.

Thank You.
The P.I.T.A. Executive Committee 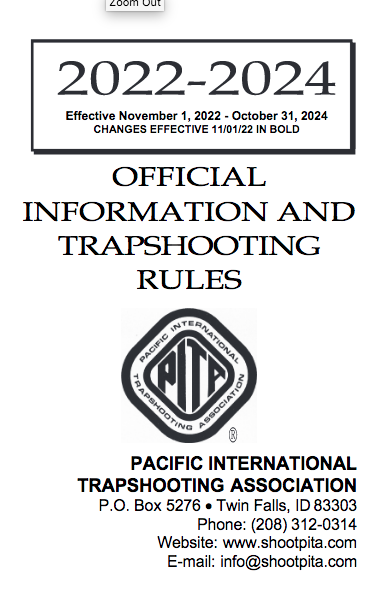