A previous profile story published in Trapshooting USA (2010) is attached for your enjoyment.

As promised, or better yet, as warned, here is the mini profile of a PITA shooter for this edition. Charles,’ Chuck’, Curtis was born May 25th, 1920, and will celebrate his 90th birthday this year. He continues to live in his birthplace, Harrisburg, Oregon, where he enjoys a solid reputation as a successful grass seed farmer. He developed equipment, still in use, for the cleaning of grass seed which is a major industry in this area of Oregon.

Chuck is the father of two girls, Shirley a retired school teacher living in Tucson, Arizona and Gloria, also a retired school teacher living in McMinnville, Oregon. His wife Donna passed away in 1995. In 1996, a good friend, Norm Bonser, died leaving behind his widow, Virginia. The two families were friends and had shot together on occasion so it was no surprise when Chuck invited Virginia to lunch. Virginia says a sister in law was visiting from Chicago and went along to chaperone the occasion. Chuck and Virginia have been together now for over eleven years. 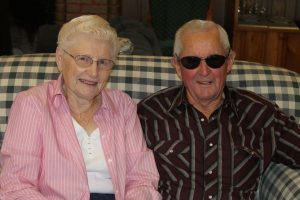 Not one to stand on the sidelines, Chuck served as PITA President in 1984 and 1985. He is an avid hunter, especially ducks, a staunch supporter of PITA and anything associated with trapshooting. We caught up with Chuck and Virginia at the Tucson Gun Club where he was shooting the Spring Grand. Chuck just laughed when asked how he was shooting and replied, not that great but we are having fun. They spend 3 to 4 months in Arizona during the winter visiting family and shooting before heading back to Harrisburg.

If there are any characteristics that stand out about Chuck it is his good humor, friendly attitude and incredible generosity. Only once was his honesty called into question. It happened while shooting an event at the Medford Gun Club. Chuck called for the bird, fired and a dove fell dead by the trap house. Chuck swears he never saw the bird before firing and the squad was so bemused no one could say for sure the target was broken. Everyone was glad to give him the benefit of the doubt and have him shoot it over. 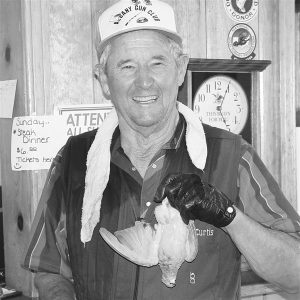 Chuck Curtis was inducted into the PITA Hall of Fame in 2006 and has over 315,500 registered PITA targets to his credit. When conditions are terrible and asked how he shot, Chuck will often respond with, “I shot my age”. This means approaching 90 years young, he will be getting better every year.