Buckle…a common device which binds two ends of fabric or belt, often used to hold ones trousers up.

Shoot…in this context a competition of individuals striving to best one another with a shotgun, regardless of conditions.

So why does a five trap club, in the middle of nowhere, operated on a generator and with a history of epic rain have as many squads as some major shoots?  Well, we will help you arrive at an answer.  It could be the challenge of shooting in some of the worse conditions known to man.  It may be the iconic trophy crab buckle that has evolved over the years to its present size and beauty.  Maybe it’s the fresh crab dinner enjoyed by over 65 people this year. 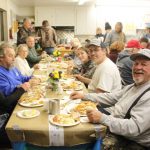 Has cabin fever afflicted all those trapshooters to the point they will come knowing what to expect?  We think the answer is “D” all of the above.

A survey of shooters reveals the majority have been attending the Crab Buckle Shoot for years.  One example is Bill Roseboom, one of more than a squad of Canadians that make the trek every year to be there.  This was Bill’s twelfth year and he finally won his first crab buckle.

Sure, there are exceptions, Lonnie Levi, a local, Tyler Borders, North Coast of Oregon and Alexis and Rylan Pickens (brother and sister) from Susanville, California, attending for the first time all winners. 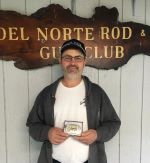 Jason Nelson, Newman, California took home the High Over All buckle.  Shooter demographics presents a lesson in geography with people coming from Canada, Nevada, Washington, Oregon and California.   It should be telling when there are some of the best shooters on the West Coast and 91 wins Saturday’s handicap event.

You have to agree that none of this would happen if not for the efforts of a group of dedicated volunteers.  Mac Robertson led the charge of those willing to brave the cold and rain to host a seamless three day event. 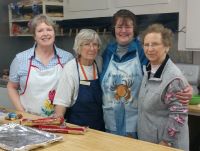 Hazel Griffith and her ladies make sure that no one goes hungry before the crab dinner on Saturday.

The best we can determine, the Crab Buckle Shoot has existed since 1998, 23 years with no plans to stop.  You should consider attending next year, it’s a good place to test your rain gear. 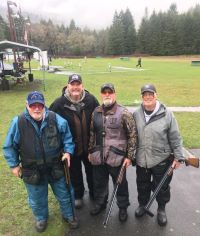