On a particularly nasty-weather-even-for-the northwest day 44 shooters gathered at Old Skagit Gun Club for their December Shoot.  The rain fell and the wind blew but Brian Fooks managed to shoot a 96 in the Singles Event and Mike O’Malley a 95 in the Handicap Event (to see all the results click here).  During the lunch break, while everyone was warming up and drying off, two milestone events were celebrated.  These milestones were actually shot during the Doubles Marathon at Old Skagit in October but the celebration was delayed until the December Shoot.  Dave McCallum reached 150,000 registered targets while Creige Scribner shot his 50,000th.  Congratulations to both of these shooters on this accomplishment.

Junior and Sub-Junior shooters can win scholarships for placing on the P.I.T.A. Allstar team.  An additional team has been added for 2016.  There will be two Junior teams and one Sub-Junior team.  See all the details click here.

The checks for the Oct-Nov-Dec events will be in the mail this week together with your membership card.  Please cash your check when you receive it.  We have a number of outstanding checks that we would like to see clear the bank.  If you happen to have any PITA checks cash or deposit them ASAP.

Programs are now posted for some PITA shoots in sunny NV/AZ.  Boulder Trap Club and Casa Grande invite you to attend their PITA shoots this winter.  Ben Avery is offering cross registration to PITA at their January Winter Chain shoot.  View/print the programs on the PROGRAMS page.

Carol Barnes, formally of Moraga, CA passed away November 27th surrounded by family in Indiana.  She first registered PITA targets in 1969 and received her 100,000 milestone in 1996.  Carol was inducted to the PITA Hall of Fame in 2002. She was preceded in death by husband, Frank, both were well known in PITA.

PITA is one of two organizations authorized to receive donations in memory of Carol.  Donations can be sent directly to PITA, PO Box 770, Lebanon, OR 97355.

Wet and windy conditions in most locations this month resulted in some lower than usual scores (click HERE to view).  While perfect scores were posted in singles 49’s ruled in handicap and doubles.  Larry Davis (Lake Co), Jim Turnbull (Yakima) and Lawrence Smith (Fallon) all earned 1/2 yard  & $275 for their score of 49/50.  Congratulations to Brad Eatmon and Wayne Norcutt – HOA winners this month with 145/150.

Once scores are finalized this Friday (December 11th) we will compile the winnings from the October, November and December events and send payout checks.  Just in time for your last minute Christmas shopping.  The payout checks are included with your membership card so be sure to open that mail when it arrives!

We are pleased to announce White Flyer will be sponsoring the Multiplex.  They are providing the random draw prizes awarded after the final event in February.  Our White Flyer Western Sales Manager, Bill Daniels, joined the event this month shooting at the Portland Gun Club.  He had a great time and hopes to hit another one on his travels.

The next event is scheduled for January 2-3, check the listing for the club near you.

Join the Executive Committee in welcoming the 2015 PITA All Stars.

The listing this year includes all shooters with the required number of targets.  The chart shows how many major shoots each attended as well as the number of different clubs shot.  Those in red/bold met the requirements of 5 clubs and 2 majors.  Others listed would have qualified but lack one or more of the requirements.

Congratulations clubs and shooters!  You broke another Multiplex record.

Join the fun at the December event held December 5 or 6.  Remember, you can only shoot the event once so if you shoot at two clubs the 2nd time you shoot is for registered targets only.  The club should contact the PITA office should this occur.  Payouts for the Oct, Nov and Dec events will be made in mid-December.

See all the winners on our Multiplex RESULTS page.

Last spring O.S.T.A. proposed a rule which would require shooters to shoot their longest yardage in any association or league. (Rule Proposal OR 1-2015.) This rule was approved at the 2015 Grand Pacific.  Since that time, several major problems with the rule have been brought to the attention of the Executive Committee and the Central Handicap Committee.  On November 2, the Central Handicap Committee and the Executive Committee met and voted to table that rule (delaying its implementation) after a lengthy discussion. The vote passed 9 – 2. The committees met utilizing the Urgency Clause, Article VII, Section E of the PITA Corporate By-Laws.

Due to this action by the Central Handicap Committee and the Executive Committee, this rule will NOT be added to the PITA Official Rules for the 2015-16 shoot year.  Please notify all members, particularly those who work at the handicap tables, that no change has been made regarding shooting your longest yardage.  The current rule may be found on page 26, Handicap Rules, Handicap Yardage Assignment.  The provisions on page 29 under Handicap Yardage Advancement (d), the use of “established ability” still applies and should be used whenever appropriate.  Advancement by “established ability” may only be determined by Executive Committee members and State/Provincial Board members.

If you have questions please contact Nadene Pope, Chair of the CHC/Rules Committee.

Implementation of OR01 passed by the Rules Committee at the 2015 Grand Pacific has been delayed pending further review.  If you have comments please contact a member of the Executive Committee or your Central Handicap/Rules Committee member.

All annual members are considered “active”.

Team placement will be determined as follows:

highest. In case the shooter qualifies for two teams at the same position, they shall be awarded the position in the age related category.

Selection of the All Star Team is based on the shooter’s ability as evidenced by their averages. The average is computed by dividing the sum of your singles average, handicap average and doubles average by three.  Targets must include at least 100 singles, 100 handicap and 100 doubles each, shot at 5 different PITA hosted shoot locations. Cross registered targets shot at an ATA sanctioned event and submitted to the PITA will not be counted in the 5 club requirement for All Stars.

If a score of 96 does not earn a punch in a PITA shoot, an ATA Shooter cross-registering will have his/her ATA card punched to reflect a half yard increase.

Change #6 a.:  Publish a program of events or post a copy of the official program on the gun club website to ensure all shooters are notified of the availability of cross registration.  A copy of this program must be included when submitting scores to the organization they are being cross registered to.

Clubs must keep all shoot records for a minimum of two calendar years.

► Page 34 of the Official PITA Rule Book titled DOULBLES: FAILURE TO FIRE, change last sentence on page:  All subsequent doubling malfunctions will be declared as lost a pair. 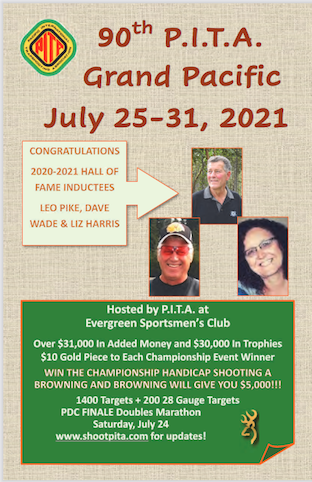